Some motorists in Crystal are not paying attention to street closed signs, creating a dangerous situation. The intersection of 42nd Avenue and Douglas Drive is temporarily closed while crews work on the sewer system for the new Crystal Police building.

The area is typically busy and is still as congested in some respects, although signs say the road is closed.

“I’m amazed they can’t read, that they don’t believe it,” said resident Gayle Nyberg. She can see all the construction commotion from her front yard. 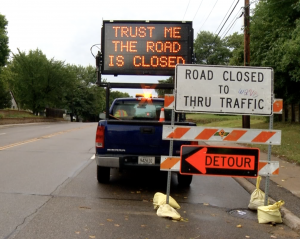 The intersection of 42nd and Douglas drive is temporarily closed. However, some drivers are ignoring road closed signs, creating a dangerous situation.

“There was a semi that was parked down there, and all these cars were trying to go around it, and he’s waiting patiently. He slowly backed up, and he backed up some more. I thought he was going to go that way, but he turned it around this way and got going,” said explained Nyberg.

Our CCX News camera also caught many drivers ignoring the street closure signs. Some drivers paused, while others kept right on going until they hit the dead end, making a u-turn in the middle of the street.

Drivers can’t say they weren’t warned. Public works crews put up detour signs at 42nd and Winnetka Avenue, about a mile before the road closure.

“The detour starts back at Winnetka. We’re encouraging drivers to use Winnetka to Bass Lake, back to Douglas or 36th,” explained Public Works Director Mark Ray.

“Do I want to have our officers give tickets because we’re the ones actually causing the road closure? No. But we could technically,” said Revering.

The intersection is expected to be reopened around September 3rd.