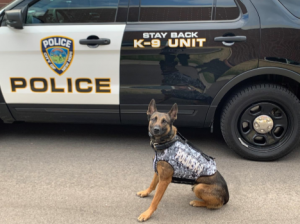 Haas was the police dog that was shot and killed by a domestic assault suspect in Duluth last year.

“Just last year, one of the vests supplied by this donor did protect one of our K9s from a knife attack,” said Capt. Scott Slawson. “They’re very valuable.”

Capt. Slawson is referring to Cody, who is still part of the New Hope police force.

“K9s are able to smell and track, find missing people. Track for articles and evidence along a certain path,” explained Slawson. “They’re also good for apprehension, they can run a little faster than we can. They’re very valuable and make us overall more efficient.”

To receive body armor from Vested Interest in K9s, Slawson said the department had to apply for a grant.