Some people, like Alex Rumsey, specifically came to support the family of Maria and the cause.

“I’m connected with them because I also experienced domestic violence,” said Rumsey.  “I think one of the biggest problems that we’re facing right now is the fact that people don’t feel like they can talk about it and check in with people in relationships that don’t seem healthy. So to bring more awareness, so it doesn’t have to be such a taboo subject.” 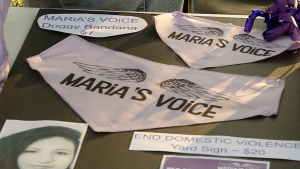 Maria’s family was also in attendance at the candlelight vigil.

”It’s our honor to have you here today and to honor Maria and the 21 other victims of domestic violence. Together we can save lives, change lives, and heal lives,” said Bill Pew, Maria’s father.

Maria’s family and friends have formed the advocacy group Maria’s Voice to work for change.

Victims who have lost their lives were remembered. Those struggling in an abusive relationship were told there is help available. Law enforcement was also recognized for the work they do.

The vigil was meant to bring the subject of domestic violence out of the shadows and make it an issue that other family, friends and community members aren’t afraid to get involved in. If you sense something isn’t quite right in a loved ones domestic relationship, ask and reach out. 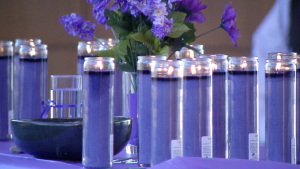 Also in attendance, another Maple Grove family who has experienced a loss because of a domestic violence incident and formed an advocacy group. Nick and Shelly Beissel formed Love Conquers Violence in memory of their sister, Natalie.