On a clear, royal blue-sky day in St. Paul, the DFL presented a clear 2020 vision for the upcoming legislative session that begins next week.

“Minnesotans have told us they want a Minnesota that works better for everyone,” said House Speaker Melissa Hortman, (DFL Brooklyn Park). “They want world-class schools. Affordable and accessible health-care. Economic security for their families and safe and inclusive communities.”

Hortman and House Majority Leader Ryan Winkler (DFL Golden Valley) were part of a group presenting their 2020 values plan. They want to close the opportunity gap that exists in some communities and push for early childhood learning.

“We think that the most important thing is to get kids off to the right start,” Hortman said. “In order to close the opportunity gap we have to look at those littlest learners.”

The Democrats are also pushing for paid family and medical leave, and want to create more affordable daycare options in Minnesota. 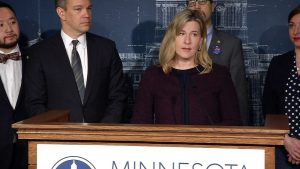 Hortman is hoping that Republicans will, in her words, “stop creating division” with their stances on immigrants and the poor.

“This demonize and divide, it may give them some partisan advantage in some political races that they are running,” Hortman said. “But it is ultimately very destructive..”

Of course if any of the DFL’s vision is to be accomplished, they’re going to need bipartisan cooperation, because they are the minority in the senate.