The last time Minnesota took part in Super Tuesday was 1992. To put that into perspective, that’s the same year the Mall of America opened.

Now, 28 years later, the state has a presidential primary and at one Plymouth polling place, a steady stream of people showed up to vote. 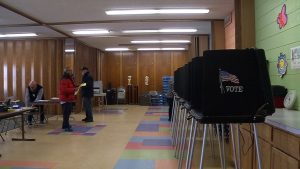 Super Tuesday could be a pivot point in the 2020 election regarding the eventual Democratic presidential nominee.

With primaries in 14 states and one territory, the stakes are high.

“I think it’s pretty big,” said Jim Christopher of Plymouth. “Probably going to decide which way our country is gonna be going in the future.”

“It’s huge,” said Diraar Jefferson of Plymouth. “It shapes our country. It shapes what we’re going to do, what we’re looking forward too and who are our people and who are future leaders are. I feel it’s highly important.”

Historically voter turnout rate in the North Star State is high. That seemed to be the case on Super Tuesday as people were eager to make their vote count.

“People can talk all they want and it’s great,” said Nicole Cornwell of Plymouth. “We’re afforded that right. But people need to also put that to good use and make it count for more than just words.”

“For a primary this one is the same if not maybe a little bit busier than other primaries,” said Don Nielsen, a Plymouth voting judge.

For most voters, a primary requires less involvement than a caucus – and allows more people to be part of the process.

“I love the caucus, that was fun,” Naborowski said. “But not everybody could go spend two, three hours on a Tuesday night talking politics and it left a lot of people out, so this is more equitable.”

If you cast an absentee ballot and selected Amy Klobuchar, or another candidate who dropped out of the race, you’re out of luck. The vote can not be changed.