Part of Hwy. 610 through Brooklyn Park is under construction for the next two weeks. MnDOT began concrete pavement repairs Monday. The work impacts both directions of 610 between the Mississippi River and Hwy. 169.

“We did begin our work on the inside lanes, so the inside lanes are closed in each direction to traffic,” said Kent Barnard, MnDOT spokesperson. “That’s a 24-hour a day closure. Next, we are going to flip to the outside lanes and those will be closed. At that time the highway entrance and exit ramps will be closed to allow crews to work.”

MnDOT says these improvements will make for a smoother ride for drivers who use 610.

“Twenty years isn’t out of the realm for having to go out and make some repairs on it,” Barnard said. “Concrete as it gets pounded, and as the freeze-thaw cycle works its magic if you will on the roadway, we do have spalling and cracking and other issues that need to be repaired.” 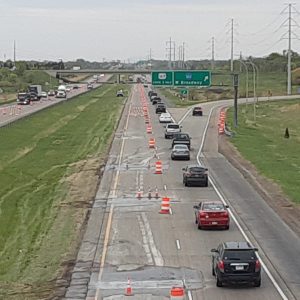 Parts of Hwy. 610 are now 34 years old. Other sections have been around for 23 years. Traffic has increased along with the population in cities such as Brooklyn Park and Maple Grove. In some ways 610 is another northern beltway.

“It really has done a great job of handling all that extra traffic that came off of I-94,” Barnard said. “Especially now that we connected with I-94 just to the west of Maple Grove. We’ve seen a real uptick in traffic out there.”

Anyone traveling on 610 should allow for potential delays. MnDOT hopes to finish the project Friday, May 22, which is the start of the Memorial Day weekend holiday.