Brother of Victim in Robbinsdale Officer-Involved Shooting: “There Needs to Be a Better System”

A man is in the hospital with multiple gunshot wounds after an officer-involved shooting in Robbinsdale. The victim’s family says the incident happened after they called police for a welfare check.

According to Robbinsdale police, officers were dispatched to a home in the 33 hundred block of France Avenue North shortly after 11:30 Saturday night after they received a report of a suicidal person with a gun.

Robbinsdale police also say they attempted to contact the man, and he unexpectedly came out of the house with a gun, advancing on police and ignoring commands to stop. Officials say that’s when an officer fired their weapon.

The family of the victim identified the man as 29-year-old Adam Nelson of Robbinsdale. Nelson’s family says he was shot multiple times and is at a local hospital in critical condition. 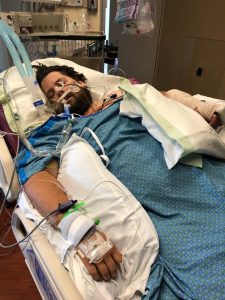 “He struggles with mental health issues, but those things need to be talked about more in the public,” said Adam’s brother, Chad Nelson. “Saturday night, he was at one of his worst places, and tragically this is what came out of that.”

“There Needs To Be A Better System In Place”

Chad says his brother is a kind soul who loves his family and enjoys riding motorcycles. He says the family called police to get Adam help and is disappointed how the situation ended.

“There needs to be a better system in place for when a person is in a suicidal state or agitated.  It’s just sad this is what came out of it,” Nelson said.

The Bureau of Criminal Apprehension is handling this case. No further details are available at this time.