Most folks shoo away squirrels, but one kindhearted person decided to lend a helping hand. 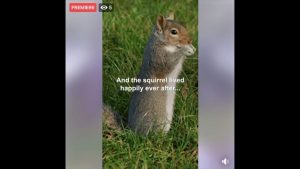 Brooklyn Park police officers Tony Weeks and Jeremy Halek were patrolling in the 6500 block of Hampshire Avenue last Tuesday when they rolled up on an unusual scene. A car was stopped in the middle of the street. When they got a little closer to the scene, officers found Chris Felix-Maldonado trying to help out a squirrel who might have been clipped by his car. In the video, you can see Chris, pushing up and down on the rodent’s heart.

“Is he giving him CPR?” asked one officer in a video taken by a body camera.  “I think he is…look at him,” the other officer shouted.

Not only did Felix-Maldonado pull over, he wouldn’t give up trying to help the wounded animal.

“I kind of ran over him a little bit. Yeah, you know, so trying to help him out,” you could hear Felix-Maldonado saying in the video.

With a little TLC and a little CPR and a few tummy rubs, the injured squirrel starts to show some signs of life.

“We’re going put you in for a lifesaving award,” said one of the officers. “There he goes.”

And it is official, the once-thought-to be-roadkill made a remarkable return. The injured squirrel scurries up a tree. Meanwhile, Brooklyn Park police say this is a first.

“In a world where we see so much trauma, and so many bad things, here’s a kid who’s really trying to do something nice for an animal,” said Brooklyn Park Deputy Chief Mark Bruley.