There are many ways to give and help others this Thanksgiving season. That includes donating blood. A blood shortage remains a challenging reality. The American Red Cross is hoping the public will fill the need. 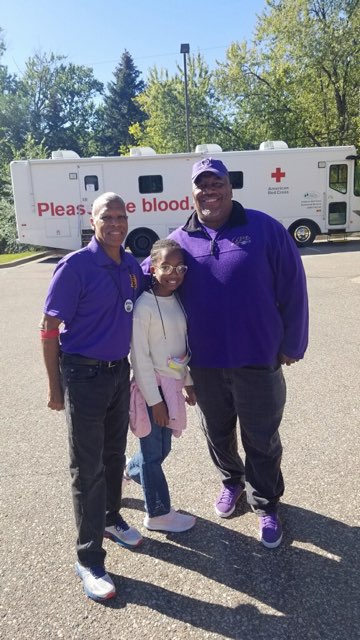 is especially encouraging African-Americans to donate. Officials say blood donations not only can save lives, but especially help those suffering from sickle cell disease, a red blood cell disorder.

James Burroughs of Brooklyn Park says the condition carries with it biases and prejudices. That’s because it disproportionately affects communities that face barriers to health care, leaving some without proper care and medication.

“We have to address systemic racism in the medical profession and hospitals that sometimes treat patients of sickle cell in a very negative way,” said Burroughs.  “In the African-American community, we’ve had things like the Tuskegee experiment. We’ve had a mistrust of health care which blood donation would fall into.”

Burroughs also has the sickle cell trait, which unknowingly led him down a painful path with his now 9-year-old daughter.

Born with sickle cell anemia, his daughter spent 66 days in the hospital when she was born. It was a dramatic life shift that continues to inspire his advocacy work to create important change for sickle cell disease.

“When you have sickle cell, those cells end up in a sickle shape so they get stuck. They get stuck by trying to flow through your blood system and when they get stuck they injure things that need oxygen,” said Burroughs.

There is still no cure for the inherited red blood cell disorder that disproportionately affects African-Americans. But patients often require blood transfusions for treatment and donations from the same race and blood type have a unique ability to help patients fighting the disease.

“Trusted messengers are so important. Just saying the Red Cross is coming to give blood doesn’t work in my community. It may not work in the Asian community, Latino community as well,” said Burroughs.

Burroughs makes a point to do blood drives with his daughter to make sure people in various communities want to give blood. In the past, he has teamed up with his church and fraternity to help bring awareness to this important need.

Burroughs says he brings people out to donate by going to community members, which induces a space of inclusion and trust.

“The more people know about it, you can then have conversations that are just not isolated to one group. You’re talking about how this impacts this community and how we all need each other to support this work in order to afford to get better.”