The Brooklyn Park mayor and city youth leaders continue to focus on how to engage African-American youth. This week, they’re getting ideas at the national Cities United conference in Knoxville, Tenn.

Cities United is a national movement to reduce violence among young men and boys. Homicide is the leading cause of death among African-American men and boys between the ages of 15 -24, according to the Centers for Disease Control and Prevention.

More than 92 mayors are involved in the Cities United effort, including Brooklyn Park Mayor Jeff Lunde.

The overall Cities United goal is to reduce homicides by 50 percent by the year 2025.

Engagement efforts such as a cops and teens basketball game is one way Brooklyn Park works to build trust and relationships with youth.

“We take 20 -30 young people over 8-10 weeks, and we basically expose them to different activities that help build their confidence, and help them identify their strengths,” says Antonio Smith, Brooklyn Park’s city lead for Cities United. 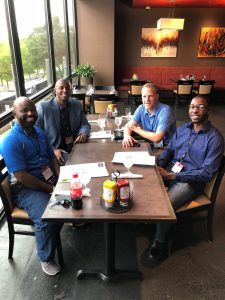 Smith says the national Cities United conference aims to create change by providing opportunities for employment, education and skills building. It also takes partnerships between the city, community and businesses.

“A lot of times young people say that they want something or they need something, our job is to help them identify what they want or need or their talent and then get that thing, the ‘it’ for them,” says Smith. “And then their responsibility is to use it.”

Brooklyn Park youth leaders will return from the national conference on Friday.

In the next month, young adults and Brooklyn Park leaders will work together to create a draft of a comprehensive public safety plan. That plan will address different approaches to employment and skills building.