A busy Brooklyn Park intersection is getting stop lights at 93rd Avenue and Noble Parkway. City engineers believe the lights will equate to lighter traffic.

“It’s pretty bad,” said Jeff Holstein, Brooklyn Park’s city engineer. “We had 21 crashes out there between 2016 and 2018. Five of those were injury crashes.”

The lights begin flashing on July 2nd. On most days 93rd Avenue is jammed in the a.m. and p.m. rush hours as drivers try to escape gridlock on nearby US 169 and Minnesota Highway 610. 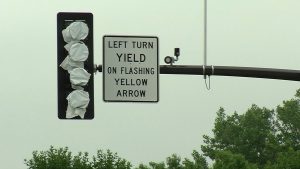 “We’ve had a lot of congestion,” Holstein said. “A lot of safety issues out there. It was high on our list and high on Hennepin County’s list.”

Most of the back up is at the junction of 93rd Avenue North and Noble Avenue, as motorists go east and then north in an effort to get on 610.

“Our models tell us with the signal that congestion certainly should subside,” Holstein said.

People spoke before city council, requesting something be done about the intersection.

But at least one neighbor wasn’t happy about the new lights. Sharlene Pyrski, who lives nearby said she was not a fan. 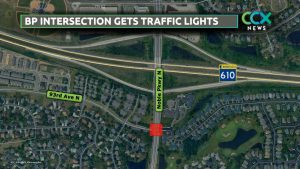 “They could have put in a roundabout,” Pyrski said. ” That would have been better. Or else no left turns on 93rd to Noble.”

The city however, says it it got plenty of feedback from residents who wanted to see the intersection improved and the stop signs removed.

“We’ve been keeping an eye on it,” Holstein said. “We knew it was coming, we just didn’t know it would come this soon. But I think it was a mix of both. We did have a fair number of complaints that drove it as well.”

The cost of the entire project is slightly more than $500,000 – which includes the new lights and the curb cuts on the street.