Six-year-old Clara Carlin has been through a lot in her young life. She was born with spina bifida, which is a congenital disability.

Nicole says there were many scary times, lots of hospitalizations, and surgeries, including an operation where doctors from Texas flew to Minneapolis to perform fetal surgery. 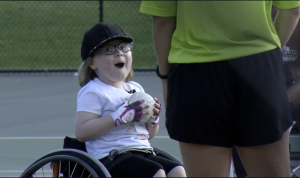 Clara Carlin has spina bifida but she’s not letting it stop her from living a full life.

Despite the medical challenges, Clara is a spunky, ambitious first grader.

She goes to Courage Kenny Rehabilitation Institute for physical therapy. She also plays for the Minnesota Rolling Twins Wheelchair Softball Team and has many friends on the team.

“It might be scary, but there are amazing times ahead,” said Nicole. “It just so nice for her to finally come unwind and be a normal child out here and play with all her friends and not have to worry about what we had in the past and just think about the fun times and future.”