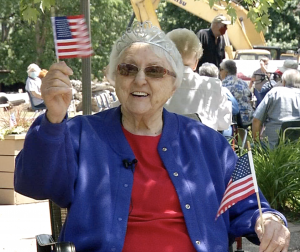 Frieda Farley is quiet and understated. When it came to her 100th birthday, she was no different.

“I haven’t given it much thought because I didn’t know what to expect,” said Farley.

“I had a party planned,” said O’Donnell.

“And this was my alternative to do a drive-by parade with the city of Brooklyn Center,” said O’Donnell  .

“And she is a World War II Navy vet,” said O’Donnell.

During the war Frieda signed up with the United States Navy and worked as a supply clerk in Oakland, Calif..

“So I got a hold of the recruiter in Richfield, Minnesota. And I told him what was going on. And he said, I’m delighted. We will be there,” said O’Donnell. 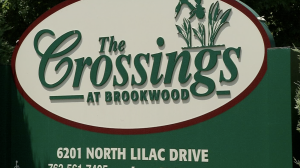 The United States Navy did not disappoint.   A service member came to salute Frieda and gave her a commemorative coin.

Frieda has been a resident at The Crossings at Brookwood for 26 years. When she moved in she only had to travel three blocks from her previous home that she and her husband bought in Brooklyn Center in 1955.   As recently as two years ago she was still driving her car. She misses Twins baseball games this summer.

I wondered if she was surprised at all Lil had orchestrated.

“Well, yes I was. I was waiting upstairs and I thought where is everybody,” said Farley.