Brooklyn Center police are investigating several violent crimes over a 24-hour span, including an incident where a semi-automatic weapon was recovered.

On Sunday, there was a stabbing at an apartment complex in the 6700 block of Humboldt Avenue North. According to police, a woman told officers she stabbed a man in self-defense during a domestic assault.

And 30 minutes later, gun shots rang out at the Pines Apartments in the 6500 block of Humboldt Avenue North. When officers arrived, they found about 15 spent rifle casings in the parking lot.

“They were able to see an AK-47 leaning up against the wall in one of the garages,” said Brooklyn Center police Sgt. Brandon Zabel.

Zabel said officers later got a search warrant and recovered the rifle, two empty magazines and an additional rifle casing.

“It’s unknown why anybody would be firing the rifle in the lot. At this time, there are no injuries that have been reported,” said Zabel. 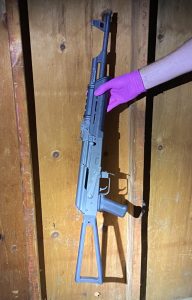 At around 1:30 a.m. Monday, a passenger in a ride-share pulled out a handgun and robbed an Uber driver at the Speedway gas station off 69th Avenue North and Brooklyn Boulevard. Police say the gunman took a small amount of cash and ran away.

Brooklyn Center police say there have been no arrests in the recent cases. If you have any information, give police a call.