A gym in Brooklyn Center is finding ways to stay connected to its members during a time when staying active has become increasingly difficult.

Most members at Curves, including Kathy Winn, are retired. Winn likes to hit the gym at least three times a week.

If it weren’t for the pandemic, Winn would be at the gym five times a week. COVID restrictions limited the club to only seven members at once.

“Before the pandemic I had 100 to 120 members coming regularly. Between the two shutdowns and now, I got more like 40 or 50. That’s not sustainable,” said Jill Dalton, Curves owner.

Dalton worried she’d have to close business for good. But state and federal grants helped the gym survive.

“Jill was looking for ways that she could still keep employees paid because of a PPE loan. So we suggested doing weekly calls,” said Diane Crimmins, a circuit coach at Curves.

Crimmins took it upon herself to make spreadsheets with a list of all gym members. Every moment staff aren’t circuit coaching or disinfecting machines, they’d make calls to members.

Marcia Gedney, a staff member, said she’s been making these kind of calls since she began working at Curves in 2002. However, Gedney said it’s especially important now because of isolation. 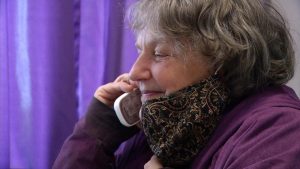 “They’re the only ones at home and have nobody else. So yeah, just to hear a friendly voice did a lot for them,” said Gedney.

During the shutdown, Winn said she received the calls too.

“It was so good to know they’re still thinking of you and the connection felt great,” said Winn. “It’s like a family and you miss it if you’re not here.”