The Minnesota Department of Public Safety Bureau of Criminal Apprehension is investigating an incident in Crystal where a Hennepin County Sheriff’s deputy shot a man armed with a knife. The incident happened shortly before 7 p.m. Wednesday in the 3600 block of Colorado Avenue North.

A Hennepin County Sheriff’s deputy tried to serve an emergency protection order to a man living at the home. Officials say the order was related to allegations that the man posed an immediate danger of domestic abuse. A court order required him to leave the home, but when officers tried to get him to vacate, they say he armed himself with a knife and locked himself in a bathroom.

“About 20 police cars were on the street, police were hiding in the bushes and nearby trees,” said a neighbor who didn’t want to be identified. 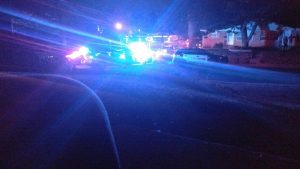 There was a standoff for about two and half hours involving the man before officials finally made an entry. Authorities repeatedly tasered the suspect, but that didn’t work. Then, a Hennepin County Sheriff’s Deputy fired his gun, hitting the man.

The man was taken to North Memorial Health Hospital where he’s being treated for a non-life threatening gunshot wound. No officers were hurt and no one else was in the home at the time of the shooting.

Crystal and Plymouth police assisted, but were not in the home when the shooting took place. Crystal police were wearing body cameras.  That video will be made available after the investigation wraps up.