If you enjoy bird-watching there is an outstanding spot to view a heron rookery near the northwest suburbs. The rookery sits about two and a half miles east of downtown Robbinsdale on two islands in the Mississippi River. On the east bank in Minneapolis is Marshall Terrace Park. From there you can walk down to the river to view the heron rookery. The best time is really April, May when there’s not any leaves on the trees. 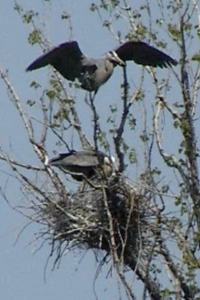 The great blue heron is the largest north American heron. They stand about four feet tall and their wing span is over 6 feet. Despite their impressive size, they weigh only 5 to 6 pounds thanks in part to their hollow bones, which is a feature all birds share.

CCX News shot video of the heron rookery in early May.

“The activity that you saw that’s around the time frame is where you’re going to see a lot of nest building,” explained Andy Forbes, Deputy Chief, Migratory Birds, Region 3 for the U.S. Fish and Wildlife Service. “Most likely they were either actively building nests or feeding young. It’s hard to say for sure.”

Forbes says once the young leave the nest in late June, activity dies down and the birds fly away.

Great Blue Herons primarily eat small fish. They can hunt day and night thanks to a high percentage of rod-type photoreceptors in their eyes that improve their night vision.

“A colonial waterbird or any kind of colonial species is a bird that will sometimes nest in really tight colonies like a heronry. Sometimes they can be a bit more dispersed. But for a heron, that’s what we have as a classic example of a colonial bird. In this case a colonial waterbird. There are a lot of reasons that they do that. Probably the main one is safety in numbers. There’s more birds at a single location. If an individual predator will comes in and you’re in a big group, you’re less likely to be predated. And in this case your nest is less likely to be predated,” said Forbes.

The good news is that there are still herons on the islands and you can still see them as they go about their business. By the end of June all the young will have fledged and the herons will disburse to wander throughout the region. Since they dine on small fish, the herons here will migrate south for the winter with some traveling as far as the Caribbean. But if the colony had a good success with their hatch they’ll return next spring to these same islands in the Mississippi around March or April to begin the breeding process all over again.