One of the owners of Omni Brewing in Maple Grove is at the forefront of the debate.

The Minnesota Craft Brewers Guild and its 150 members are asking for some laws to be updated. The group wants to be allowed to sell more beer in different sizes, directly out of taprooms. 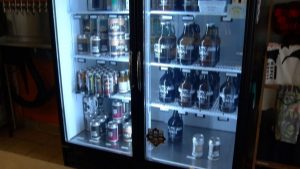 The craft brew industry is big business in Minnesota. According to growler magazine, there are just under 200 breweries in the state.
Now some taprooms want to expand their revenue stream, but they would have to change a few laws firsts.

“Our laws surrounding breweries and taprooms are a little bit behind the times,” said Zach Ward. He is the head brewer at Omni Brewing. He’s also a member of the Minnesota Craft Brewers Guild and sits on the group’s legislative committee.

The Guild wants to make two changes. The first has to do with the number of beer that’s sold.

“If you sell 20,000 barrels of beer a year, you can no longer sale growlers in the state of Minnesota,” he explained.

The other issue has to do with the types of containers taprooms can use to sell beer to take home.

“Currently, the law says that you can sell a 750-milliliter growler or crawler, or a 64-ounce growler,” said Ward.

The current law doesn’t allow for any sizes in between. The situation is leaving a sour taste in Ward’s mouth. Many breweries like Omni make and sell four six-packs, but they can’t sell them in the taprooms.

“We would just like the ability to do that,” said Ward.

But, not all smaller breweries agree.

She says if the off-sale laws change, Wicked Wort might see fewer people coming inside the pub to sit down and have a beer.

“Once, and if, that production cap expands, there are smaller places that are going to see their sales drop,” said Carlyle.