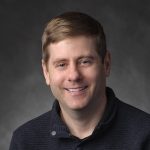 Roger Larson was born and raised in Maple Grove where he grew up playing hockey and baseball.

He started learning about video production as a teenager, when he and his friends would record skateboarding tricks. Roger liked video production enough to take a class at Hennepin Technical College in Brooklyn Park and then go after a degree and a job in the field. After graduating in 2005, he started working at Northwest Community Television and has logged hours in every department in the building since. He’s also spent time working with video at Twin Cities PBS, WCCO, and Bally Sports North.

When Roger isn’t creating stories for The Connection, you can find him spending time with his wife and two children or doing something with music. He’s been a DJ for 20 years, collects records, and likes to learn new instruments.

He still makes time for pick-up hockey too.

You can reach out to Roger at rlarson@ccxmedia.org