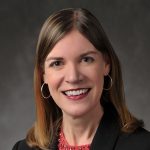 Ann grew up in the northern suburbs and graduated from the University of St. Thomas with Communication and English degrees. She worked as a ‘one man band’ reporter and photographer in Alexandria, Minnesota as well as an anchor/reporter in La Crosse, Wisconsin. Coming home to the Minneapolis area in 2001, she worked as a segment producer for the Twin Cities Public Television program ‘Health Diary’ and was thrilled to join Northwest Community Television/Channel 12 in early 2002. She’s a musical theater fan who has seen too many to count, but always looks forward to the next one.