Josh Giuliani had two goals and two assists in the win for the Crimson.

Maple Grove broke a 1-1 tie with a pair of goals in the second period, one early and one late.

Giuliani set up Landen Gunderson in the slot for a 2-1 lead 4:50 into the second period.

Finn Brink, who scored the first goal for the Crimson, set up Giuliani for a 3-1 lead late in the period.

Blake Steenerson scored an unassisted goal early in the third, with Giuliani adding an empty-netter late.

Maple Grove faces Prior Lake in the semifinals Friday night. 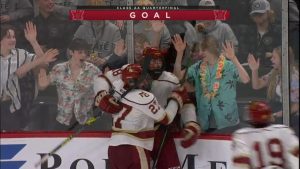