For the second straight season the Maple Grove boys hockey team had its state championship hopes dashed in overtime.

Logan Gravnik’s goal at 8:59 of the second overtime lifted Andover to a 6-5 win over the Crimson in the state Class AA final.

In 2021 Maple Grove lost in overtime to eventual state champion Eden Prairie in the state semifinals.

Before over 18,000 fans Saturday night at the Xcel Energy Center in St. Paul the Crimson grabbed a 1-0 lead 12 seconds into the game on a goal by Finn Brink.

Josh Giuliani scored the first of his three goals at 4:44 to put Maple Grove up 2-0 early. 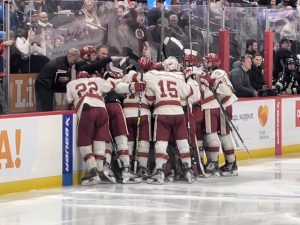 But the Huskies’ Jacob Pierson scored a big goal with 3.5 seconds to play in the first period, cutting Maple Grove’s lead to 3-2.

After falling behind 4-3 in the third period, Giuliani’s third goal of the night and eighth of the state tournament tied the game.

Chayton Fischer scored with six minutes to play to put Maple Grove ahead before the Huskies’ Gavyn Thoreson tied the game at five with just 1:50 to play setting up overtime.

Neither team scored in the first eight minute OT before Gravnik’s state winning goal in the second overtime gave Andover a sweep of the state girls and boys hockey titles this season.