Nature lovers are heading to Eastman Nature Center in Maple Grove to check out a special mating ritual involving a bird you may not have heard of: the “timberdoodle.”

On a chilly spring night this week, dozens braved the elements to track the elusive timberdoodle, more formally known as the American woodcock. The creatures migrate to Minnesota in the spring and mainly nest on the ground, hidden among vegetation.

“They’ll fly to migrate to get to the food source. Otherwise, again, they’ll fly from where they spend the day, walking around in wet areas,” explained Elaine Tucker, interpretive naturalist with the Three Rivers Park District.

This is a special time of year when the male woodcock shows off a so-called sky dance to attract a female.

“He soars up into the air, and sometimes you see him silhouetted against the sky, and then he spirals, and that’s the dance,” said Tucker.

The male birds will find an open clearing to attract a female for mating, but this ritual usually only happens shortly after sunset. Once the male bird lands, he repeats a nasal call to attract the female. Each round can last a few minutes. If a female in the area is impressed, she’ll join him to breed. 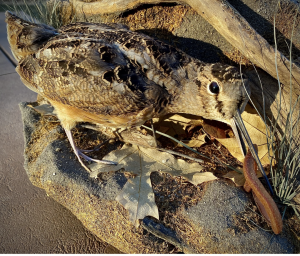 People are flocking to Eastman Nature Center to see the mating ritual of the timberdoodle.

The bird-watching experience is so popular that the Three Rivers Park District added more staff.