“It’s really important to be doing a show like this right now where you see two really strong girls turn into women and find their strengths, and deal with their weaknesses, and find each other without having someone save the day for them,” said Stage Director Jeff Anderson. 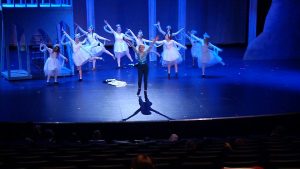 In 2013, the Disney animated musical “Frozen” hit the screen. Since then, millions of children worldwide have watched the movie and sung the songs.

Vladimirova can say she’s something of an Elsa expert. She’s seen the movie too many times to count.

But she’s not the only one who is an avid “Frozen” fan.

“Once my sister and I watched it 3 times in one week at the movie theater,” said Zinnia Johnson, also from Robbinsdale.

SOAR was founded in 2011 and is an acronym for St. Michael, Otsego, Albertville, and Rogers. It’s mission is to provide performing arts learning opportunities and has found its reach growing.

“We have students that are coming to us from the Maple Grove, Robbinsdale, New Hope area and as far west as the Montrose, and Buffalo areas,” said Ellen Beaudry from SOAR.

“You feel like you’re in a community with everybody else. Like they’re all your neighbors. Even if you live really far away, you just become a big family, said big sister Zinnia Johnson.