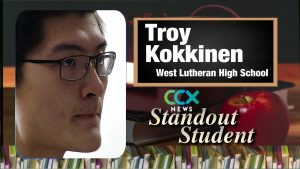 “He has the combination of everything that you want to see in a student,” said Steve Jensen, who is Troy’s basketball coach and math teacher.

Jensen says Troy Kokkinen is a talented student athlete and is well-liked too.

“He’s a great leader, and he’s very gifted in what he has in all areas,” said Jensen.

“My religion class is my favorite because not only do I study the Bible and scripture, also other religions and cults that I don’t really know. At least to me, it’s really fascinating, to find out what other people believe in and what they devote their whole lives to,” said Kokkinen.

He can play almost any sport, but by far, basketball is his favorite. This year, he hit a milestone.

“About two weeks ago he hit the thousand point mark which was a lot of fun for him,” said coach Jensen.

“What was cooler for me was just all the people that were there. I had a lot of family there and that meant a lot to me,” said Troy Kokkinen.

Troy’s senior year will wind down all too soon, but he’s developed good habits which will serve him well after West Lutheran High School.

“He’s going to work hard. He’s very disappointed if he doesn’t get a grade that he thinks,” said Jensen.

Kokkinen doesn’t have his collegiate plans set in stone yet, but he’s thinking of the University of Minnesota Duluth. He is considering majoring in businesses and/or engineering.