The start of the 2020-2021 school year has been anything but normal for students at Wayzata High School.

“I definitely miss seeing my teachers and my friends in person,” said Spencer Mateega, a senior at Wayzata. “It’s definitely not the same to see them over the camera.”

Wayzata is currently under the hybrid learning model, but because Mateega’s classes don’t require him to be in person, he’s done the whole year virtually up to this point.

“The homework load isn’t too bad,” he said. “I get my class work done and it’s been going great so far.”

But successfully handling the distance learning component of school isn’t the only thing that’s been great about this school year for Mateega.

This month, he was named as a 2020-2021 African American Scholar. The award is presented by the College Board National African American Recognition Program based on outstanding performance on the Preliminary SAT/National Merit Scholarship Qualifying Test.

“It’s awarded to the top 2.5 percent of African American scores, so it kind of shows my academic level, and it’s sent to all colleges,” Mateega said. “And I’m quite happy about that, so they’ll be able to see that I’ve challenged myself in school and have the test scores now to back it up.”

According to Mateega’s teachers, he hasn’t been afraid to challenge himself over the course of his academic career at Wayzata High School.

“Spencer takes accountability for everything he engages in,” said Dawn Johnson, an English teacher at Wayzata. “He takes feedback tremendously well, critically and supportive feedback. But he sees every day as an opportunity and every opportunity as a resource. And so he takes ownership of everything that he wants to do, and if he doesn’t have success with something, he owns it.” 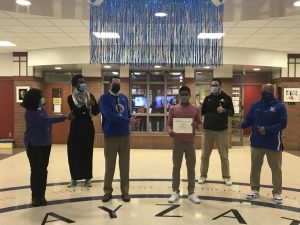 Mateega’s main interests are business and math, which is one reason why he’s president of DECA, Wayzata’s business club. But for him, his interests have nothing to do with personal gain.

“Specifically, I’m interested in marketing and digital marketing,” Mateega said. “So with marketing, it has an ability to reach underserved populations. You can specifically target campaigns to whatever demographic or socioeconomic profile you want. So the benefit and the possibility with it are pretty big, and I really see it as something that can close the opportunity gap, the achievement gap.”

At this age, not all students know what they want to do or how they want to go about helping society. Spencer, however, has certainly defied the norm.

Acting as a leader

Johnson, the English teacher, recently asked Mateega to speak to her current students to walk them through how he utilizes LinkedIn to find resources.

“And the first thing I did with our current students is just made them realize that he wasn’t necessarily where he is now a year ago,” Johnson said. “We don’t always find what we want to do when we’re young people, and that’s okay. But what Spencer has done is, he knows what he wants to engage in. He may not know specifically want type of business he wants to study, but he’s figured out that networking and getting to know people and developing those EQ (emotional intelligence) skills with the help of people is one thing that’s going to help him in the business world, and he’s found value in that.”

Another one of Mateega’s teachers, Scott Tordeur, says that he has a number of gifts, but there’s one in particular that stands out.

“One of my favorite Spencer gifts is his ability to find value in every situation,” Tordeur said. “And it’s very unique for someone in Spencer’s spot to say that, ‘if I can’t use this today, where might I be able to use this in in my future?’ And Spencer is amazing at establishing valuable relationships, and that has been one of his greatest gifts from my perspective.”

When Mateega graduates, he plans to study marketing with a data analytics component. He says he’s already been accepted to the University of Minnesota, but he’s also hoping to hear from the University of Pennsylvania’s business school.

In the meantime, he still has the rest of his senior year at Wayzata to enjoy.

“I hope they’ll have our graduation in person,” Mateega said. “And maybe in-person [classes] by fourth term.”