Last summer and fall, violent crime skyrocketed in Brooklyn Park. So much so, elected city leaders urged quick action. But so far this year, there are some promising signs.

Brooklyn Park Police Chief Craig Enevoldsen says they were worried last year when the city saw an increase in violent crimes like murder, rape, robbery, and aggravated assaults. He made the comments during a recent city council meeting. The early numbers show thefts and aggravated assaults down through the first three months of this year. However, burglaries are slightly up. 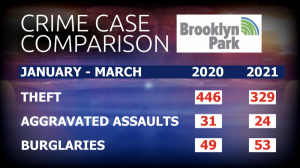 Crime stats for Brooklyn Park are trending down for first half of the year compared to previous year.

“First two months we were not in a good place in comparison to 2020. Thus far in March, we are lower than we were in 2020,” said Enevoldsen.

What remains to be seen is what will happen following the Derek Chauvin trial. The former Minneapolis police officer is on trial, accused of murdering George Floyd. Last year, protests and unrest broke out following the May incident. There were also calls for police reform. Chief Enevoldsen says the lack of trust in police also attributed to the higher number of incidents last year.

The city is doing several things to cut down on violence and gain the trust of the public. The Brooklyn Park Police Department is doing street outreach and using  Marie Ridgeway and Associates to deal with trauma and mental health issues. The city is also teaming up with Salem Inc, an outreach group from a Minneapolis Baptist church that diffuses conflict during investigations.

Meanwhile, the chief says he’s worried about staffing shortages and how it will impact keeping the peace. The Brooklyn Park leader says his department could be down 13 officers in May.