Regina Chu, Judge Who Presided Over Potter Trial, to Retire

Hennepin County District Court Judge Regina Chu called the Kim Potter trial “the saddest case” in her 20 years on the bench. Now she plans to retire.

Chu actually submitted her resignation on Feb. 15, three days before she imposed Potter’s prison sentence. But it wasn’t announced publicly until this week when Minnesota Governor Tim Walz put out a call for applicants to fill the job.

Potter is the former Brooklyn Center officer who fatally shot Daunte Wright on April 11, 2021 during a traffic stop. The former officer said she mistook her service weapon for her Taser. Potter received a two-year sentence. She is currently serving time at a state prison facility in Shakopee. Of the two-year sentence, 16 months will be served in prison with the remaining time on supervised release.

Family members of Daunte Wright condemned the sentence saying it wasn’t harsh enough. For a first-degree manslaughter charge in which Potter was convicted, state guidelines called for a sentence between about six years and eight and a half years.

Chu’s retirement comes at a time more judicial decisions are coming under scrutiny. State lawmakers wanting a tougher stance on crime have been calling for judges to follow state sentencing guidelines. Sen. Warren Limmer, R-Maple Grove, authored legislation to change the recommended sentences for crimes committed with a firearm to hard mandatory sentences.

Chu, who is 68, became the first Asian-American woman district judge in Minnesota when she was appointed by former Minnesota Governor Jesse Ventura in 2002.

Her last day on the bench will be May 6. 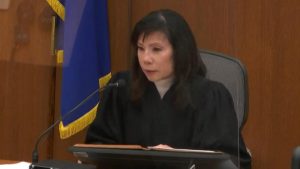