Italy is roughly 4,800 miles away from the Twin Cities, but if you’re craving authentic Italian cuisine, you can find it within the friendly confines of Robbinsdale.

“It’s all authentic Italian cuisine, and it’s great for families or for date nights or just a regular night out on the town or a night out on the patio,” said Jesse Pfliger, the new owner of Nonna Rosa’s.

Pfliger took over last fall after the original owners decided they wanted to take a break from the restaurant business.

And in just a few months, he’s put his own mark on Nonna Rosa’s with a new ceiling, new lighting, a paint job, updated décor, and some new menu items.

“We’ve added some traditional Neapolitan pizzas and some flatbreads,” Pfliger said. “We upgraded the happy hour menu a little bit.” 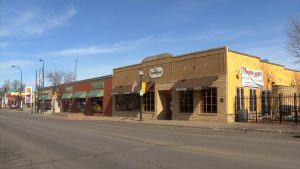 Nonna Rosa’s first opened in Robbinsdale along West Broadway in 2010.

Longtime customers, however, will still see all of their old favorites.

“It’s fresh, better-tasting than a lot of other Italian places that I’ve been to,” said Mary Frei, a customer from Robbinsdale. “Different things on the menu that you don’t see everywhere.”

Frei stopped in Monday afternoon to order the chicken bruschetta. She’s just one of the many Robbinsdale residents who show support for the local restaurants over the big national chains.

“This city loves its locally-owned businesses and operators, and even amongst the other business owners, it’s been great,” Pfliger said.

That is to say, it’s been as great as could be expected during a pandemic in which restaurants have endured a number of restrictions and shut-downs, the first of which happened on March 17, 2020.

“We thought we were all going to close down for two weeks and everything would be back to normal,” Pfliger said. “Didn’t work out that way.”

‘Two Weeks to Flatten the Price’

The initial COVID shutdown was supposed to last two weeks to help flatten the curve. Instead, it lasted into June.

So to commemorate the anniversary, Nonna Rosa’s is offering a “two weeks to flatten the price” special, where everything will be 10 percent off, starting March 17 and ending March 30.

“And so we wanted to do something that was kind of kind of tongue-in-cheek with the two weeks, but also to give something back and show our appreciation for the community,” Pfliger said of the special.

Yet unlike the first COVID shutdown, the 10 percent off special will actually last just the two weeks.