Rep. Mike Freiberg (DFL-Golden Valley) sat down with the CCX Newsmakers segment to talk about the end of the legislative session.

“It’s never exactly pretty, but they were able to reach broad agreements on budget targets,” said Freiberg. “There are still a lot of things to work out.” 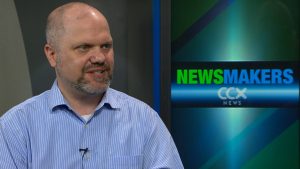 Freiberg has worked on cannabis legislation since 2013. In that time, he’s seen attitudes change regarding legalization.

“There’s definitely more acceptance of it,” said Freiberg. “I’ve always felt like it’s coming to Minnesota and it’s not legal in multiple states. I’ve always felt like if we are going to do it, and I assume we are because it’s happening everywhere, we need to do it right. We need ot do it where it’s not targeted toward kids and doesn’t become another tobacco epidemic.”

Some of the ways the drug can be regulated so it doesn’t appeal to kids involves banning fruit flavors and not having the gummies available in recognizable forms, like gummy bears.

Freiberg also says there are disparities in how marijuana is prosecuted as a crime and getting rid of prohibition could help address some of those issues.

Another issue that should be resolved in regards to marijuana, Freiberg says, is medical marijuana reform.

“That program has been unaffordable to a lot of people,” said Freiberg. “One thing we passed is a provision that will allow cannabis to be smoked as part of the medical program, if the person is above the age of 21. So I think that will be a lot more affordable to many people.”