“It hit us in many different ways and impacted our clients significantly,” said Waddell.

People Incorporated has more than 60 programs across the Twin Cities, including one in New Hope that was visited by Sen. Tina Smith in May.

People Incorporated started in 1969 in a church basement in response to a community need to provide mental health care for homeless veterans.

Waddell says services during the pandemic were very different from normal operations.

“It was very stressful for a lot of people,” said Waddell. “At first we did see a slight decline in services in referrals because people were forced to move to a more virtual platform. The were quarantined, and they missed the opportunity to meet with their therapist face-to-face.”

Waddell says this resulted in some fear and isolation, as well as people realizing they needed more mental health care.

“We were fortunate at People Incorporated because we had already had in place a platform for telemedicine. So we were able to move into that telemedicine platform,” said Waddell. “Not all of our clients could because of resources they had in terms of technology, or some didn’t feel comfortable doing virtual therapy.”

Now more clients are starting to come back. School-based programs are back in place too. 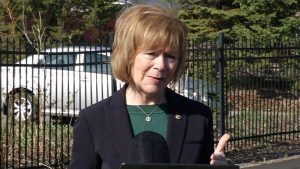 Sen. Tina Smith learned more about the nonprofit when visiting in May.

“We received some funding from the CARES Act from the federal government, so that with her interest in child adolescent services it brought her to the Boone Avenue facility,” said Waddell.

The facility in New Hope houses school services as well as day treatment for elementary and middle school children.