North Hennepin Community College president Dr. Rolando Garcia and Brooklyn Park city manager Jay Stroebel announced at the end of October that the collaboration for a performing arts center called the Center for Innovation and the Arts would be coming to an end. The announcement came in a letter dated Oct. 27.

“As we looked at data around enrollment and looking at the financial situation of the college, we would have some issues trying to fund it from the college’s end,” explained Garcia. “Once we did a feasibility study, even trying to raise dollars would be a challenge in this environment.”

“Between those two pieces coming together, I felt the best decision for the college moving forward would be to seek an alternate way of achieving the same thing, which is bring arts to the community,” said Garcia. 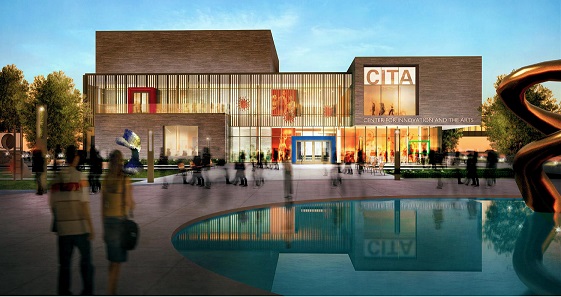 Renderings of the Center for Innovation and the Arts, which would’ve been a performing arts center for the northwest suburbs.

Garcia says the college plans to revamp the Fine Arts facility, which is the oldest building on campus.

“It certainly needs some love, so that’s what we intend to do, invest in the building and show that building some love,” said Garcia. “We’ll make sure we have a facility that will serve the community well.”

North Hennepin will also collaborate with the city of Brooklyn Park for arts programming.

The land that the college owns for the project near the Brooklyn Park Library will someday be sold and re-invested. There’s a project in the works for a nearby second of land that will be used for apartments and childcare. See that story here.