Wednesday, students played tag and jumped up and down on play equipment during recess. But it’s not all play here as students have a rigorous science, engineering and math curriculum. 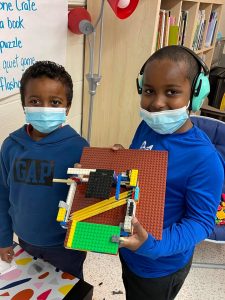 Students at Twin Lakes Academy use objects from classroom to create a pencil holder.

Fifth graders are getting some hands-on experience crafting a terrarium. They spent the past few weeks planning for their science project.

“We started the terrarium about two weeks ago, and we drew what we thought it would look like in our logs, and I think it turned out good,” said one student.

The young scholars can learn Arabic, which is unique for an elementary school.

“We have a really strong Arabic program. But we also this year added a Spanish program,” said Beugen.

“When I first walked in, I was like, this is the right school for me. I’ve met a lot of new people, and I have more friends now,” said a fifth-grade student.

Many of the students are from East Africa. School officials say they moved to Brooklyn Center because of its diverse population.

There are more than 230 kindergartners through 6th-grade students and two classes for each grade. However, school officials would like to add more classrooms.

“We have plans to add a seventh and eighth grade in the fall of 23,” said the executive director.

School officials are also planning to add an academic daycare program in the next few months.