A Maple Grove woman has filed a civil lawsuit against the city of Minneapolis and its police department for injuries she says she sustained during protests last summer. Autumn Larson says the injuries occurred May 30, five days after the death of George Floyd.

According to the suit, Larson, 25, attended a protest near E. 31st Street and Nicollet Avenue S. When an 8 p.m. curfew took effect, Larson and her sister left to get their car and head home. However, when Larson tried to drive away she was blocked by another vehicle on an entrance ramp to Highway 55. That’s when she says police fired tear gas and a projectile through her open car window. Larson’s sister, sitting in the passenger seat, helped pull the car over.

The projectile struck the bridge of Larson’s nose, knocking her unconscious, the suit said. The civil lawsuit claims Larson was struck “without a verbal warning.” 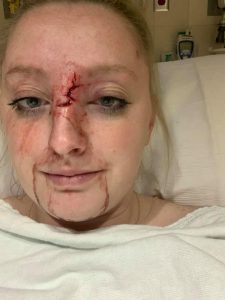 Larson’s injury required stitches and has resulted in lingering effects of a concussion, the suit stated. The complaint says she continues to suffer headaches, dizziness, sleeplessness and anxiety.