A Maple Grove fifth grader could give Wall Street stockbrokers a run for their money.

Students had seven months to grow their portfolios and were given $100,000 in game money to invest. Jack put his money in various businesses, including IMAX, Kohl’s, McDonald’s and Wells Fargo.

Kim LeClaire, Jack’s teacher, has played the stock market game with students in her fifth-grade quantitative section for the past six years. She says the game teaches students current events and math skills.

“Jack soared above and beyond what was expected of the class,” said LeClaire. 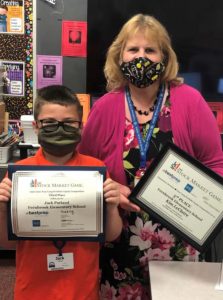 Putland was serious about the class assignment. He studied the market each day, looking at the history of company stock performances before deciding whether to make a move.

“I really like how the stock market game was sort of in real-time,” he said.

After months of buying, selling and trading, the savvy student investor, was up over $80,000. Putland placed third among hundreds of Minnesota students who participated in the game. He was honored at a virtual awards ceremony May 20.

“I think I might do good in the actual stock market,” the fifth grader said.