In the restaurant business, success is often defined by location. In 2019, Lisa Edevold made the bold decision to move her restaurant, Tiger Sushi, out of a certain Bloomington megamall and into a Plymouth strip mall.

“We decided to try out the western suburbs and got a very warm reception here to be honest,” said Edevold. “People have been wonderful to us.”

The restaurant is now called Lucky Street, but customers will find a lot more on the menu than sushi.

Edevold says her sushi chefs all specialize in Thai cuisine. So while they still sell sushi, the Lucky Street menu is focused on the Thai food.

“They’re two different cultures, but the people that like Thai food also tend to love sushi,” Edevold said. “So this way nobody has to choose. They can get everything they want under one roof.”

Support during the pandemic

Since Lucky Street opened in February of 2019, she says the customers have shown an overwhelming amount of support, even during the pandemic.

“I was very nervous. I thought that we would lose our staff,” Edevold said. “I thought our revenues would be gone. But literally the next day, the neighbors, our customers, people started showing up to do takeout and it saved us.”

It helps that they serve delicious food that also happens to be conducive to takeout.

“When it gets to your house, a little bit of reheating and it’s good to go,” she said.

Meanwhile, on Tuesdays in June, people will have yet another reason to order takeout. There’s a special promotion involving the restaurant’s popular potstickers.

“Any order over 40 bucks, we’re going to throw these babies in, for free,” Edevold said. “So it’s just a nice little added perk to get you think about us.” 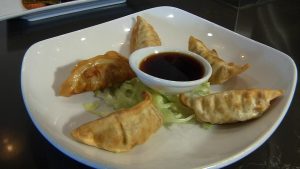 On Tuesdays in June, anyone who spends more than $40 at Lucky Street will get a free order of potstickers.

Edevold says it’s a little perk as a way to say ‘thanks’ for all of the support.

“It was our customers, this neighborhood, Plymouth area that kind of got us through this pandemic,” Edevold said.