A speed networking event at the Robbinsdale Academy – Highview alternative program in Golden Valley gave CCX a chance to give back. Our own Pafoua Yang spoke with students about being a multimedia journalist. She and several other representatives of careers from corrections officer to psychologist were on hand to let students find out about the kinds of jobs waiting for them when they graduate. 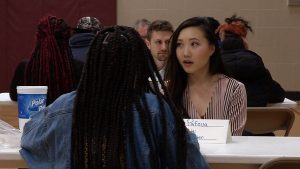 For speed networking co-host Linda Valentine, the event is an important step for the school’s students.

“It gives the students some idea of what careers are out there,” said Valentine. “And gives them an opportunity to talk to people in jobs they wouldn’t normally even ask about.”

The program’s been running for years, and Valentine says it’s an important part of Highview’s mission to help their kids succeed.