Despite Sunday’s rain, more is needed to ease drought conditions. More than half of Minnesota is experiencing drought. And the Twin Cities is currently more than two inches below-average rainfall for June.

Maple Grove officials say the drought is straining local water supplies. Last week, the city’s water pumps were working more frequently to keep up with demand. The city’s system can push out about 34 million gallons in a day.

“Last week, we were producing anywhere between, I’d say 19 million to 24 million gallons in a day,” explained Jay Murzyn, utility operations engineer, for the city of Maple Grove. 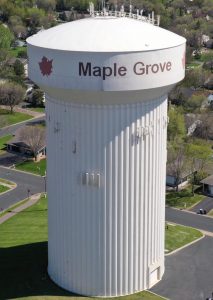 Maple Grove water system is strained during drought because one tower is down.

“The high demand and not having additional storage we would typically have in this tank right here, for the time being, could put a strain on the system,” said Murzyn.

The issue impacts Osseo, parts of Dayton and Corcoran because Maple Grove also provides water to those cities.

“In these drier, hotter stretches like we’ve been having, everybody’s trying to irrigate their lawns, including Corcoran, and Dayton and Osseo, so yeah, it puts a little more stress on our system,” said the city engineer.

Maple Grove is reaching out to residents who do a lot of lawn watering, asking them to cut back and water before 10 a.m. or after 6 p.m. There are currently no water restrictions in the city, but that could change if the drought continues.