A couple of local teens and childhood friends raised thousands of dollars in less than two months in a fight against cancer.

Jake is Kat’s neighbor and family friend. He’s 10 years old and was diagnosed with lymphoma cancer in 2018.

“It’s heartbreaking to see how it affects family and it’s hard and I want to do as much as I can to help out,” said Kat.

Heartbreaking even more because Jake’s mom passed away from cancer a few years ago. 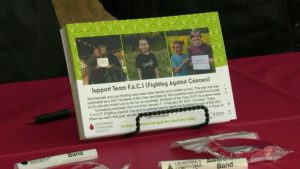 Kat was nominated by a member of the Leukemia & Lymphoma Society to help raise money in honor of Jake. However, the fundraiser was a competitive one. Fifteen other student teams participated and whoever raises the most money gets a scholarship.

“We’ve been raising money all over the country. We have donations from Texas, California, Ohio,” said Lexi.

The pair sent letters, post cards and quite a few email blasts. As a last ditch effort last weekend, the friends raised money outside a Maple Grove Cub Foods.

“We are celebrating the donations we get, but accepting the ones we don’t,” said Kat.

At the end of the seven-week period, Kat and Lexi exceeded their goal with $18,400.

In total, all student teams raised more than $430,000. The funding will go toward research to find a cure for leukemia and lymphoma cancer.

Kat and Lexi didn’t end up winning the scholarship, but they got a better reward — Jake’s recovery from cancer.