Starting March 30, CenterPoint Energy will resume work on a long-term pipeline replacement project which will see over 60 miles of natural gas pipeline replaced. The pipe was originally laid in the 1940s and 1950s. This year’s target is a stretch running through Golden Valley, Crystal, and New Hope. 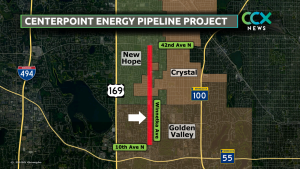 The project will happen in four phases:

Phase 1 begins March 30. This phase will replace one of two natural gas mains running under Winnetka Avenue between 23rd and 42nd Avenues North. The company will close one lane of traffic to give crews room to work.

Phase 2 is planned for late April but is subject to change. It will hook that new gas main up to the houses it serves. That could include gas meter relocation for some customers.

Phase 3 begins the first of June. In the third phase, CenterPoint will replace the second gas main. Drivers will also see a lane closure to accommodate crews. The work will be done two blocks at a time, taking up to two weeks per block.

Finally, during phase 4 the company will restore boulevards, sidewalks, and lawns that will have been torn up during construction.

Area residents can sign up for continued updates here or contact CenterPoint directly at csv.constructionservices@centerpointenergy.com.  The company asks that emailers refer to the “Winnetka Avenue 2020 Belt Line Project.”